The day was May 12th 1874. Dr Legrand Capers was serving with the Confederate Army in the battle of Raymond. Suddenly, a young man fighting next to him screamed, his tibia had been fractured. The bullet had then ricocheted off the bone, obliterating his left testicle and disappeared. After quickly patching up his comrade he was immediately rushed off to tend to a nearby young woman who had been shot in the abdomen, the bullet had passed into her uterus and “was lost”. Both patients thankfully recovered. But, the girl’s stomach became distended. Dismissing this as a side effect of the injury Capers was shocked when 278 days after her injury she gave birth to boy. However, the greatest shock was still to come when 3 weeks after his birth the baby displayed an unusual scrotal defect. Capers immediately performed surgery and found a small damaged bullet. He then published his findings in the American Medical Weekly in 1874 declaring it to be the same bullet that had injured both patients, thus giving the first example of human artificial insemination by bullet!

There is one slight catch in the story. None of it happened, it was a joke story. This however, did not stop the spreading and becoming widely accepted, as late as 1959 it was being cited as fact by the New York Journal of Medicine. 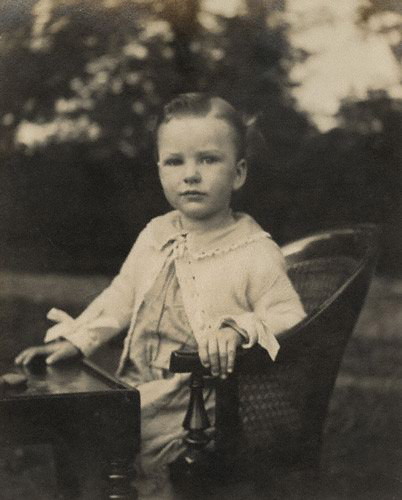 Everybody’s mother tells them they are special. Children are doted on by their parents and made to feel they are the most important people in the world. However, for one individual there was a little more this.  Henry Coombe-Tennant, born in 1913 was ‘engineered’ by his parents to be a messiah in a bizzarre story of early 20th Century psychic experimentation.

Britain at the turn of the century was a decidedly odd place to be it seems. Having accepted the Darwinian theory of evolution, many were unable to come to terms with the implications of his findings, that humanity is not special from other organisms and that in a Judeao-Christian sense there is no afterlife. As a result some turned to occult like activities claiming them as science in attempts to prove that death is not the end.

One individual who was involved in these psychic experiments was Gerald Balfour (younger brother of Prime Minister Arthur Balfour), an MP who at one point was secretary of state for Ireland, and Winifred Coombe-Tennant (a British Delegate at the League of Nations). They and other spiritualists came up with “The Plan”.  Half spiritualism and half eugenics, “The Plan” was to create a child who would be scientifically engineered to change the world. This, however isn’t a tale of designer babies in the modern sense. The child would be altered by those beyond the grave!

Balfour and Coombe-Tennant were believers in the power of “automatic writing”. This is a process in which an individual writes something without any consciousness or thought, and it was believed that long dead individuals were controlling what  was being written. Balfour, Coombe-Tennant and others believed, following ‘correspondence’ with these spirits, that the dead would engineer the child to “deliver humanity from chaos”. One spirit in particular they were trusting was Francis Maitland Balfour (another of the Balfour brothers) a Cambridge Biologist who died in 1988 whilst climbing Mont Blanc.

There was one slight thing in the way of their plan, both Balfour and Coombe-Tennant were married to other people. Charles Coombe-Tennant was almost 60 at the time, but despite any potential paternity doubts said nothing. Gerald Balfour took a more direct approach telling  his wife, Betty, that he could no longer have sex with her.  Upon this news, Betty apparently sank into depression, although the two were reconciled years later when he explained why he made that decision.

From this adulterous relationship was born Augustus Henry Coombe-Tennant in 1913. So did Henry “deliver humanity from chaos” or “bring peace and justice into the world”, in short, no. But, he still led a very interesting life. After attending Eton and Trinity College Cambridge he went off to fight in World War 2 with the Welsh Guard. Unfortunately, he was captured and kept as a prisoner of war for 2 years, before staging an almost miraculous escape. He simply walked out of occupied Europe in British uniform, unable to speak any language other than English.

After this he later worked for MI6 before converting to Catholicism and becoming a monk. It was not until late on in his life that he was told his rather strange origins.

So next time your parents are a bit pushy, just be thankful that they don’t expect you to save humanity!

This was originally printed in Felix however, has been expanded on here.

This is hoax dates back to the mid 90’s when reports in the UK emerged that a Hungarian Scientist had invented a condom which would play music when put on. The stories reported that the song selected for the condoms was ‘Arise, Ye Worker’ (aka the communist hymn The Internationale). Despite their best efforts no one was ever able to find Ferenc Kovacs and his lyrical inventions. But you can enjoy the song here:

The same occurred almost a decade late when reports surfaced that Ukranian Dr Grigorii Chausovskii had produced condoms with ‘sensors’ that would alter the music they played depending on wearers position and would get louder the more vigorous the action. The report it still available on the website of The Sun here. Again it turned out to be nothing more than a hoax with Dr Chausovskii and his invention impossible to track down.

Having done a bit more research into this area of hoaxery, the condom seems to be a surprisingly popular choice! However, one story dismissed as a hoax which had an element of truth was passed round via email a few years ago. The story went that in China used condoms were being manufactured into elastic bands and hair ties and being sold, causing risk of STI’s and generally just being disgusting. The presence of condoms within the hair ties was discovered by a woman who noticed when her hair tie had frayed that the elastic was an unusual colour. Now, whilst this story does appear to be true in certain respects it is not believed that the condoms were used. It is thought that they were factory run-offs that failed quality control and were put to another use.

Valentine’s day is upon us. With love hearts adorning every shop window, radio stations playing non-stop love songs and an army of loved up teddy bears invading homes there is never a better time to look at the science of love.

A recent meta-analysis has indicated that falling in love can take a little as a fifth of a second and can produce similar euphoric effects to cocaine.

“These results confirm love has a scientific basis,” says Stephanie Ortigue who conducted the study at Syracuse University. The study has shown 12 areas of the brain work simultaneously to release chemicals such as dopamine, oxytocin, adrenaline and vasopressin, bringing about euphoria when falling in love.

It was also found that the nerve growth factor levels also increased, especially in those who had just fallen in love. Ortigue claims that while this is interesting in terms of being a neuroscience curiosity it could have potential therapeutic possibilities for those suffering depression after heartbreak. She says “”By understanding why they fall in love and why they are so heartbroken, they can use new therapies.”

Now for anyone that has ever been down about a failed relationship that is no doubt a tempting solution, a pill to cure heartache would sell in the millions. However, having seen ‘Eternal Sunshine of the Spotless Minds’ I am wary of using science to get rid of heart break!

Alternatively you could look at this information in another way. If researchers are claiming that by understanding the chemical process they may be able to treat a broken heart, could they then not use the same knowledge to create love? Will we end up with a situation where married couples on hard times can have chemical and hormonal therapies to fall back in love with each other? I doubt it as the comments by comments by Ortigue seem to be no more than the typical ‘5-10 year’ theoretical enhancements the media loves.

But can you use this information to impact on the success of dates you have tonight, no? Although, if it does all go wrong then blaming biochemistry might bring a little bit of comfort.